Home » News » AN APPLE A DAY KEEPS THE DOCTOR AWAY: TRUE OR FALSE

AN APPLE A DAY KEEPS THE DOCTOR AWAY: TRUE OR FALSE 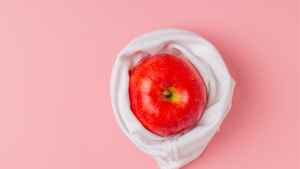 An apple a day keeps the doctor away, you have probably heard the statement somewhere before. The statement first appeared in print in 1866, and the phrase was coined in 1913.

Although the statement is not entirely true, eating apples can greatly affect your health in a positive way. Research has shown that eating more apples is not associated with fewer appointments or visits to your doctor.

In this article, you will find how eating apples can affect your health positively and if it does keep you from the doctor.

A bite of an apple can do so much for your physical health. Listed below are the nutrients that can be found in one medium-sized apple;

Vitamin C especially is one of the most effective nutrients for the body. It helps the body against immune system deficiencies, cardiovascular disease, prenatal health problems, eye disease, and even skin wrinkling.

According to Public med central, Apples are also a great source of antioxidants like quercetin, caffeic acid, and epicatechin

Research has also shown that eating more apples can lower your risk of having severe chronic heart conditions or heart disease. The reason is that apples contain soluble fibers that help to bring down your cholesterol levels.

Research has shown that high intakes of flavonoids have been linked to a 20% lower risk of stroke by reducing inflammation.

Several findings have shown that apples contain cancer-fighting compounds such as antioxidants and flavonoids. According to one of these findings, eating a good amount of apples was associated with a decreased risk of developing lung cancer.

Another research has shown that women that eat apples had lower rates of death from cancer. Scientists also believe that their antioxidant and anti-inflammatory effects may be responsible for their potential cancer-preventive effects.

According to Healthline Antioxidant-rich, apples may help protect your lungs from oxidative damage.

A research performed on more than 68,000 women show that those of them who ate apple had a lower risk of asthma. This is because, Apple skins contain the flavonoid quercetin, which can help regulate the immune system and reduce inflammation. The reduction in inflammation may affect asthma and allergic reactions.

Eating Apple is linked to a lower risk of diabetes

According to Healthline, several studies have linked eating apples to a lower risk of type 2 diabetes.

In one large study, eating an apple a day was linked to a 28% lower risk of type 2 diabetes, compared to not eating any apples. Even eating just a few apples per week had a similarly protective effect.

This may be possible because apple contains polyphenols which help prevent tissue damage to beta cells in your pancreas.

Apple is good for bone health

Test-tube studies have found that eating a higher amount of fruit could be associated with increased bone mineral density and a lower risk of osteoporosis.

Apples contain fiber and water which makes them filling and in turn reduces calorie intake and improves weight loss.

In one study by Public Med Central, people who ate apple slices before a meal felt fuller than those who consumed applesauce, apple juice, or no apple products.

The study also found out, that those who started their meal with apple slices also ate an average of 200 fewer calories than those who didn’t.

According to Healthline, In a 10-week study performed on 50 overweight women, participants who ate apples lost an average of 2 pounds (1 kg) and ate fewer calories overall, compared to those who ate oat cookies with a similar calorie and fiber content (3Trusted Source).

Some researchers also think that apples are more filling because they’re less energy-dense, yet still deliver fiber and volume.

Eating apples may not directly impact the number of times you see or visit the doctor but it does affect your health greatly including lowering the risk of many major diseases including diabetes and cancer.

It can also aid weight loss naturally and improve bone health. A medium apple equals 1.5 cups of fruit — which is 3/4 of the 2-cup daily recommendation for fruit.

To enjoy all the benefits of this fruit you must eat the whole fruit both skin and flesh as they both have their exclusive nutrients.

HOW TO SUPPORT SOMEONE WHO IS SUICIDAL

5 Ways To improve your bone health